In The Light: Ben Hoover 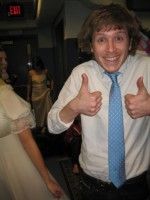 Senior Ben Hoover’s first attempt from the director’s chair was trying and difficult. The new director finished his first effort without achieving everything that he had set out to do.  A new play however, turned frustration to joy. Those who attended Masque and Triangle’s performance of the play Mnemonic earlier this month witnessed Hoover bring deferred hopes to fruition.

“It was probably one of the most enjoyable things I’ve done here at Colgate,” Hoover said. “The way that it all came together, the group dynamic – we all worked to create it together – made for this creative process that was just amazing.”

His success with Mnemonic emerged from earlier projects. His first proposed production of the play Shriker never went forward.

“It was too strange, too fantastical – a terrifying play, really,” Hoover said. “It just didn’t work out.”

When he eventually got his chance to direct a play, with last year’s Peter Pan, the instinctive stuff, the kind that only comes with experience, proved vexing and elusive.

“All the little things you need to know to convey your vision I just didn’t have yet,” Hoover said. “But after your first time doing something, you feel you want to do it again.”

This neuroscience major moonlights as an actor and director in Colgate’s many acting companies. In addition to Masque and Triangle, Hoover is also a member of Experimental Theater and Charred Goosebeak. But when he’s not experimenting with avant-garde theater, he’s conducting a different kind of experiment in Associate Professor of Psychology Jun Yoshino’s neuroscience labs.

“It’s four students who work with each other. Professor Yoshino is so hands-off it’s like we’re running the lab,” Hoover said.

Hoover also gets to play the role of big man on campus, at least among the Benton Scholars, for whom he serves as a Link and RA. Introducing these promising young leaders to life at Colgate is a role that Hoover has taken up dutifully. His residents seem to have imprinted themselves upon their caring RA, to the point that many of them affectionately refer to him as “Mama Goose.”

“It all started with orientation,” Hoover explained. “I was their Link, so they were all sort of following me in clumps. So they just started calling me ‘Mama Goose.’ I had no choice in the matter.”

But despite his dedication to his studies and his gaggle of first-years, Hoover always finds himself coming back to theater. Like a well-used mnemonic device, Colgate theater evokes memories that never die.

“In the end, my life at Colgate has been defined by theater,” Hoover said. “I mean, it’s just that’s what I’ve done. It’s been fun.”