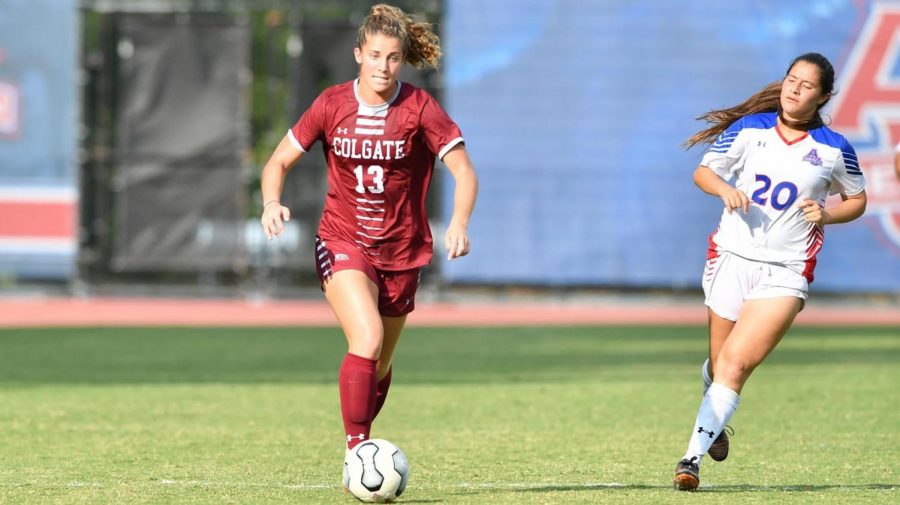 As the season approaches its close and the Colgate women’s soccer team remains on the outside of the Patriot League’s top six, the team was in desperate need of a win and the valuable three points that come with it against Loyola at home on October 26.

“We know that winning is our only option if we are to going make the tournament. We know that we have worked so hard to get to where we are now and that we deserve to have a chance at the Patriot League title. I am super proud to see that our team still has some fight left in us, especially since the first half of our season hasn’t gone our way,” senior defender Leah Lewis said.

With one game remaining, the Raiders need all the points they can get in order to  claim the sixth seed and clinch postseason berth.

Colgate, after outshooting its opponent 14-12 in the first 90’, battled Loyola nil-nil until referee Moo Hackett’s whistle signaled the end of regulation.

Sophomore defender Ruby Diodati picked up a yellow card in the 75’ and sophomore midfielder Hannah Pinkus, who led the Raiders with four shots, had the last chance of the game, but sent a shot wide of the net in the 87’.

It was the fourth straight game the Raiders have held their opponents scoreless through the first two halves. Lewis, after the Loyola game, earned her second consecutive Patriot League Defensive Player of the Week honors.

“I think the change in formation is what has really helped us defensively the past couple of games. We now have four players in the back line instead of three,” Lewis said.

This time, it was junior goalkeeper Sophia Boggs who recorded the clean sheet; it was her third consecutive shutout of the year. Boggs made five saves on the evening against Loyola.

The season-saving golden goal that earned the vital three points started on a corner kick taken by senior forward and captain Abby Sotomayor from the left. On the connecting end, junior midfielder Lexi Mitchell (wearing lucky 13) sent a lofty header to the bottom left corner of the net to end the game; the first goal of Mitchell’s career could not have come at a better time for her team.

Following her golden goal, Mitchell earned her first collegiate honor and was named Patriot League Midfielder of the Week.

“We knew going into overtime we needed to put something away to keep our season alive so we were locked in. When Syd earned us a corner kick with two minutes left on the clock, we knew this would be one of our last solid chances of the game. Abby played a beautiful floated ball off the corner, and I was able to get my head on it and redirect it into the net. It was an awesome moment. We battled until the end, and it was a total team effort. I was just so happy to get the win for our seniors,” Mitchell said.

The Raiders will host Army, needing a win to stay in the fight for a playoff spot, on Saturday, November 2. The Senior Day game will be at 1 p.m. at Beyer-Small Field in Hamilton, New York.

For some, Saturday’s game might be the last of their collegiate careers.

“I’ve learned so much and created so many new friendships these past four years as an athlete. I want to go into this game and win because I know our team has the capability to win a Patriot League championship. However, I also want to play this game as a tribute to all of the coaches I’ve had throughout the years, my parents and all of the time that I’ve dedicated to this sport. At the end of the day, this game will be a celebration for all of the seniors of how far we’ve come,” Lewis said.

If the Raiders get take care of business at home and get the help they need, the Patriot League quarterfinals are set to kick-off Tuesday, November 5.