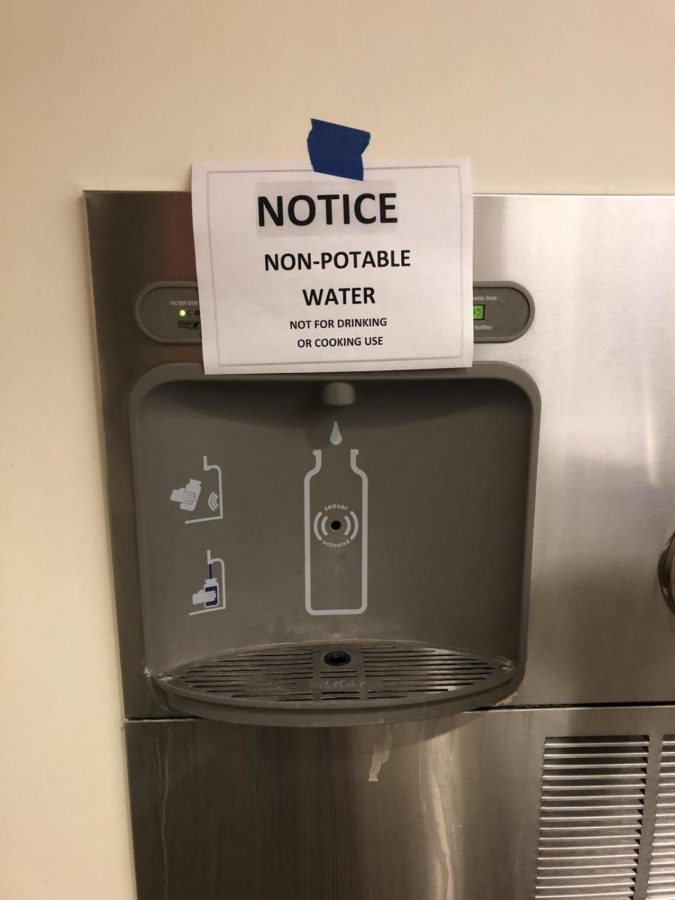 Lead Contamination in the Library

This story is a follow-up to last week’s story of high lead levels found in the water of buildings on campus along Broad Street, College Street and Hamilton Street.

The University and the Village of Hamilton are together working to hire an external engineering firm to investigate the cause of the contamination that has caused high levels of lead in the tap water of buildings along Broad Street and College Street, according to a campus-wide email sent Monday, October 28 from Director of Environmental Health and Safety (EHS) Mary Williams.

“An engineering review will be conducted to more clearly understand what is causing elevated lead levels in first-draw sampling, and to develop a series of possible long-term solutions in collaboration with the Village,” Williams said.

Contamination was discovered in Case-Geyer Library, where non-potable water signs also went up in the bathrooms and by the water refilling stations on the evening of October 23.

According to testing by EHS released October 17, first-draw samples of water from Case-Geyer showed 280 parts per billion (ppb) — more than 18 times the action level for lead set by the U.S. Environmental Protection Agency (EPA). Further testing released October 24 showed elevated levels of lead in the water of James B. Colgate Hall (Admissions) and James C. Colgate Hall (Donovan’s Pub and the Hall of Presidents), buildings adjacent to Case-Geyer. Flush samples taken after water ran for up to two minutes showed lead levels under EPA action standard or undetectable in the testing sites of Case-Geyer, James B. Colgate Hall and James C. Colgate Hall.

Williams said the signs posted by the water refilling stations were put in place while facilities ensured the filters within each system are properly filtering out lead.

“The bottle fillers and hydration stations in Case are already outfitted with filters certified for lead removal. EHS is working with Facilities to double-check each individual unit. The signage will be updated at each station as filters are verified,” Williams said.

All water-filling stations in Case-Geyer have since been tested by facilities and deemed safe to use with updated signage.

Sophomore Sydney Schweber said the news of high lead levels in the water of in Case-Geyer and surrounding buildings made her concerned for the quality of water elsewhere on campus.

“I don’t think the administration has appropriately addressed this situation. We have been kept in the dark about when and where testing is occurring and if it is even occurring in certain areas at all,” Schweber said. “My suitemates and I purchased a filter for our faucet because our building has yet to be tested. It makes me very concerned that I have heard nothing from the school about testing in my building, so I do not know if the water is safe.”

According to Associate Professor of Chemistry Anne Perring, a student in her upper-level Chemistry Instrumentation course originally discovered high lead levels of lead in lab testing of the water of 80 Broad Street (Bunch House), in which the student collected the water sample first thing in the morning, likely after the water had sat in the building’s plumbing overnight.

“I have no idea whether this was a problem last year, but I wouldn’t be surprised it was only this year somebody got up first thing in the morning and took a sample, that would show it,” Perring said.

According to Williams, Facilities installed water filters in the Chobani Café and Donovan’s Pub on October 8, after the first buildings on Broad Street came back with high levels of lead.

“The Chobani Café and Donovan’s Pub were provided with faucet-mount filters on the 8th as a precaution before results were received,” Williams said. “Dining locations also now have inline filters for the soda and ice machines.”

Williams said that the high lead levels found in the water of Case-Geyer and surrounding buildings do not indicate a campus-wide spread of the contamination up the hill, in line with the results of testing at various locations.

“These results do not indicate an issue on the upper campus, because Case is served by the same line as Broad Street,” Williams said.

While administration awaits investigation to determine the full cause of the widespread contamination to determine long-term solutions, Perring said she theorizes recent road construction along and near broad street and the old age of many of the impacted buildings may play a role in the issue.

Updates and resources on the situation may be found on the University Correspondence tab from the Office of Communication on Colgate’s website.