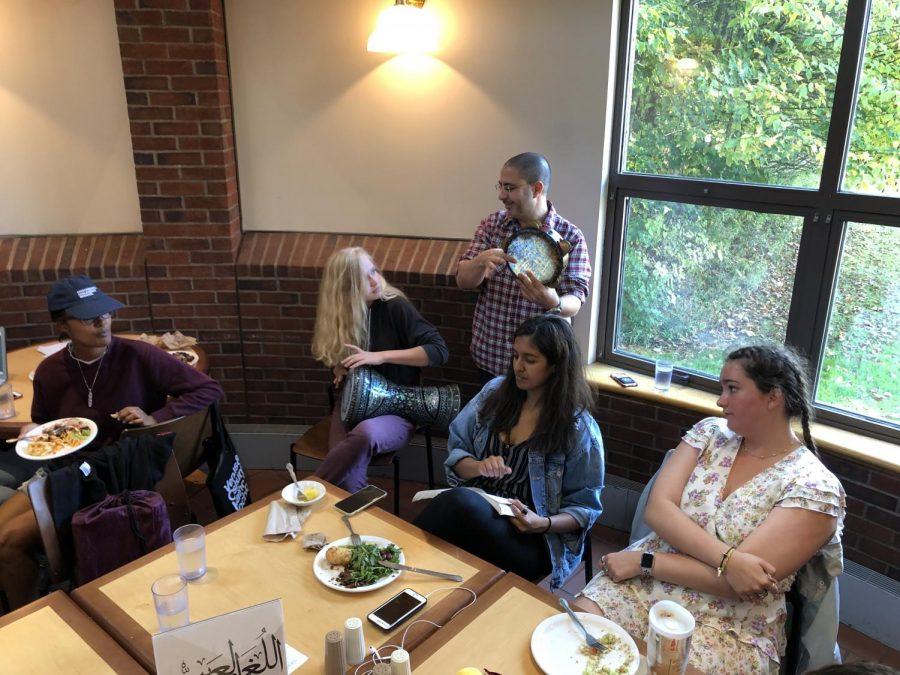 The Arabic Music Club, ‘Habibi’s Beats,’ is a music-based group aimed to teach Arabic culture through Egyptian instruments. The new CLSI-recognized club also provides a space where students can use music as a medium for learning and understanding. Even for students who are not musicians, the club offers the chance to learn about other people and their backgrounds. Participants will have the opportunity to learn vocals and how to play new instruments.

Sophomore and president Abigail Flynn said she hopes that this club will allow students the opportunity to explore music in a way that was not previously available at Colgate.

“I founded this club because I saw it as a great opportunity to merge learning the language of Arabic with the rich musical heritage of Egypt. I played various percussion instruments in high school but they were all of the ‘Western’ variety, so I saw this club as a chance to have students explore instruments and styles of music that aren’t available elsewhere on campus,” Flynn said.

Flynn has laid out a few simple goals to guide Habibi’s Beats through its first year, and one hopes that they will be able to host

performances to share with the community the new skills they have learned. Their profile on “Get Involved” shares the mission for the organization:

“Our goal is to teach students how to play Egyptian instruments, how to sing Arabic songs, put together a performance for the end of the year and present at various University events on and off campus,” Flynn said.

Looking at the year ahead, Flynn hopes to have a diverse set of participants and educate students on campus, no matter their background, about this interesting sector of music. She said that this is a club for anyone who wishes to participate.

“This club is not just for Arabic or Middle Eastern and Islamic Studies students! We welcome anyone who wishes to learn and experience alongside us, regardless if they are a current Arabic student,” Flynn said.

She believes the club is a fantastic opportunity for those who wish to simply expand their musical abilities as well.

“This club is a great chance for students who may have played some western instruments in high school and want a chance to explore different regional instruments. It’s also an awesome opportunity for students who have never done music to learn how to play as well as learn about other cultures,” Flynn said.

All students, regardless of their musical or ethnic background, are encouraged to join Habibi’s Beats and explore Arabic culture in a way that is new to the Colgate campus. Students can join the organization through Get Involved and by contacting Flynn, President or Leigh-Ann Wenzel, Student Organization Adviser.

Ayman Abdalla is the Arabic Intern who arrived in 2017 and is working with Flynn to get the club up and running.

“[The club] has two [purposes]. First of all to teach our students how to play Middle Eastern or Arabic Instruments, and also to sing in Arabic. Basically, it’s to serve the academic, educational purposes,” Abdalla said.

“The plan is, since we don’t have instruments  yet, we will be focusing on singing.”

Abdalla himself plays 8 instruments, including  a variety of percussion instruments, the Accordion in the Egyption style and a little bit of the lute. He plans to teach some of these instruments himself, as well as bring expert on the Egpytian version of the violin from the local area.

He expressed that he has been thinking about this idea  since he arrived at Colgate.

“I wanted to do it since 2017, which was my first year  here. Honestly, I wasn’t experienced enough to make it happen” Abdalla said.

He also believes that this musical platform will help  Arabic students learn the language based on his own experiences with musical learning.

“When I was [attending] the University of America in Cairo, we had to teach the students and I [did] it using musical songs” Said Abdalla. “I believe that musical songs can be very helpful with learning a language and memorizing vocab. Imagine yourself singing a song and reading a paragraph. Which one will you memorize easier?”

Both Abdalla and Flynn encourage all students, Arabic or non-Arbaic, to join them at any point. Abdalla hopes that faculty and staff will get involved as well.

Junior and Arabic Student Emily Rahhal shared her excitement about the club.

“[Ayman’s] excitement  about sharing his culture with the students is infectious and he always thinks of new ways to engage the community in a fun, learning environment” Rahhal said.