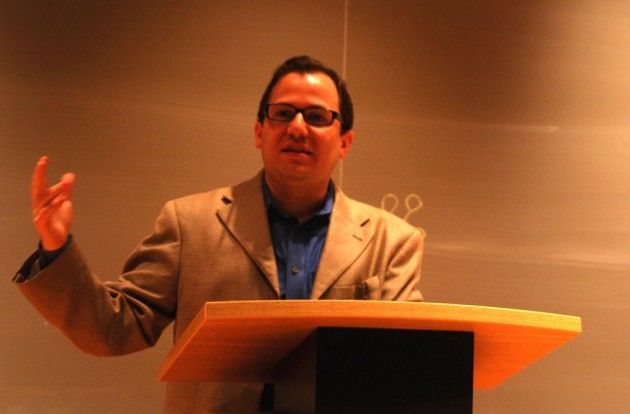 On October 22, Colgate welcomed Jewish author Benyamin Cohen, who gave a discussion about his memoir, My Jesus Year. Sponsored by the Religion department, this event gave great insight into one man’s experience attending churches in the Bible Belt, which led to his unlikely spiritual awakening.

Cohen began the discussion with information about his unique childhood. He was raised as an Orthodox Jew in Georgia, and almost everyone in his family was a rabbi. In fact, attached to his house was his father’s synagogue.

“From a young age, I was already in the deep end of the Jewish religious pool. I felt forced to accept this rather than chose to. I literally lived in a synagogue,” Cohen said.

Still, Cohen did not rebel against his religion yet.

“I did all these things like attend synagogue and eat a Kosher diet because I felt guilty,” Cohen said. He was certainly confused about his religion and sought a spiritual discovery.

Cohen did not find this discovery right away, but did find his true love when he married his wife, who was also on her own spiritual journey. She was the daughter of a Baptist minister, who had become interested in Judaism.

“It was great seeing Judaism through the eyes of a convert,” Cohen said. “I saw [my wife’s] first Passover, first Chanukah, etc. Her osmosis rubbed off on me, but not enough. I was still cynical and unsure if this religion was what I wanted.”

Finding his wife acted as a catalyst for Cohen, and helped him begin his own personal journey in the most unique way possible. Cohen’s interest in churches arose when he noticed how greatly they were attended compared to synagogues.

“I was raised in the Bible Belt, so there were churches everywhere. And every parking lot was always full,” Cohen said.

He wondered what churches were doing differently than synagogues to draw so many people, and if synagogues could use these marketing strategies themselves. He was also curious about if he could learn anything about his own faith from attending these churches.

“My exploration existed on two levels, one for myself and one for the Jewish community as a whole,” Cohen said.  And so, Cohen decided to go to Church every Sunday for a year. “52 Sundays, 52 churches, 52 denominations.”

Cohen went on to explain some of his unique experiences during his spiritual experiment. During the year, Cohen attended a ‘Mega Church’ – which over five thousand members attend – a Christian rock concert and even an “Ultimate Christian Wrestling” event. These experiences were extremely interesting and unusual, but Cohen found that he preferred the more standard houses of worship. His favorite church was a small, Episcopal Church across the street from his house growing up.

“This church had a set service every Sunday and was very traditional. It reminded me a lot of a synagogue, and allowed me to reevaluate my own services. I appreciated it more because I saw it through a fresh set of eyes,” Cohen said.

Cohen also admitted to preferring a smaller service, because it gave its worshipers an opportunity to have “a quiet conversation with God.”

After the year was complete, Cohen certainly underwent a spiritual transformation.

“From each place I went, I was able to bring the lessons I learned to my own brand of Judaism, rather than just accepting all that my father told me,” Cohen said.

Cohen completed his quest and religious transformation when he went to a Catholic priest for confession. He told the priest that his sin was that he felt distant from his faith, and the answer he received truly inspired him.

“The priest told me that there a lot of things we don’t want to do, but we should do anyway, and that if you do it long enough, you’ll learn to like it. Going to services and talking to God was a pure and simple concept, and it took a priest to wake me from my spiritual slumber,” Cohen said.

Though it sounds ironic, Cohen showed through his book talk how going to Church made him, in the end, a better Jew. He taught the important lesson of keeping an open mind to new and uncomfortable experiences, both in a religious and general sense.