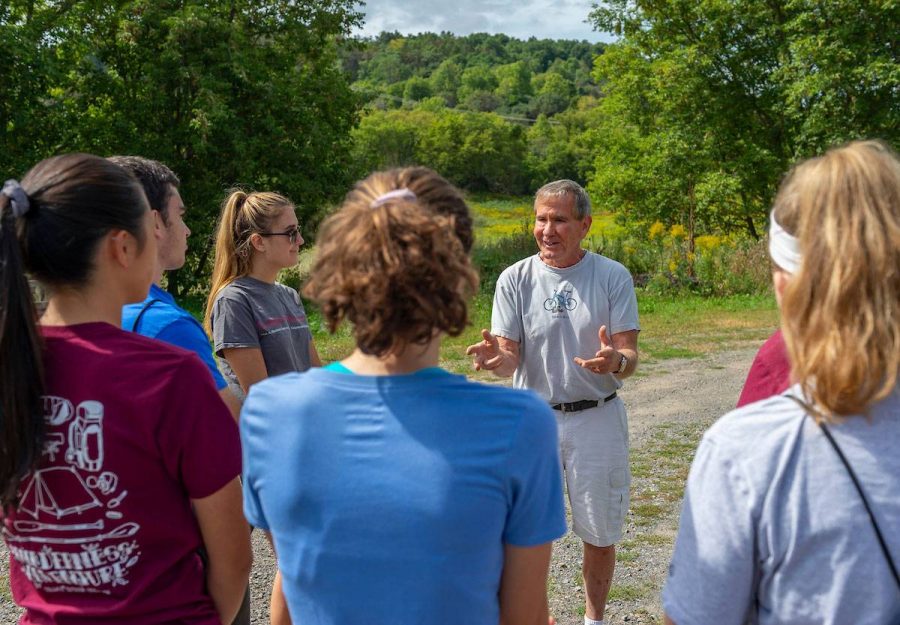 The COVE: Student Involvement After 20 Years of Services

As The Max A. Shacknai Center for Outreach, Volunteerism and Education (COVE) celebrates its twentieth anniversary at Colgate University, its impact on the campus atmosphere and students’ lives is clear in the passionate way students talk about their involvement in COVE clubs and activities.

The COVE’s mission statement is to foster “a commitment to social responsibility and engagement through mutually beneficial, community-centered partnerships.” Whether it’s providing SAT tutoring to local high school students, volunteering at animal shelters or mentoring middle schoolers, organizations that operate through the COVE are focused on supporting the community surrounding Colgate, enriching Colgate students’ lives as well as deepening the connection between the university and Madison County.

Junior Harper de Boer is a co-leader of Pet Pals, a student organization that volunteers at the Chenango SPCA and operates through the COVE.

De Boer joined the organization in her first year at Colgate. Hailing from New York City, she was a frequent volunteer at local animal shelters and didn’t want to give this up while in college.

“It’s a great way to kind of get out of Colgate campus and also just help local communities because … they just always needed help there. So it’s good to really kind of do whatever we can to help them because they’re very overwhelmed a lot of the time.”

Every student organization that operates through the COVE has a team advisor who helps them with planning and advertising as well as funds to hold events. De Boer spoke highly of this service.

“The COVE is really great with that, and just kind of being able to have a larger network and just kind of broadcast it to all of Colgate campus and beyond. I think it’s great that … the COVE specifically has all those resources to do so,” de Boer said.

Beyond fostering a connection between Colgate and the surrounding community, COVE programming gives students an opportunity to do meaningful and fulfilling work. De Boer enjoys the opportunity to destress every time she volunteers at the Chenango SPCA.

“I miss my dogs all the time. So it’s nice I think for a lot of students to be able to kind of get out of the Colgate bubble and go to neighboring communities [which] makes a huge difference,” de Boer said.

Throughout its 20 years of existence, the COVE has grown and developed, but last year was an unanticipated period of transformation. With the COVID-19 pandemic and resulting restrictions on interactions between Colgate students and the Hamilton community, the COVE’s activity was very limited.

“We were supposed to come [to Colgate] and do local service projects … but instead they asked us to find a local volunteer project and all come together on Zoom and all talk about what we did at home by ourselves. They gave us websites where people would post … small or big groups that were like ‘Oh, we’re looking for volunteers for this’ and you could put in a special emphasis like medicine or environmentalism,” Tinley said.

For the COVE pre-orientation program, Tinley, an Atlanta native, helped organize, package and deliver school supplies for Atlanta students in need. After students discussed the projects they did in their hometowns, the COVE gave presentations about the opportunities for volunteerism and outreach typically available to Colgate students.

Now that restrictions have been lifted, there are many more opportunities for students to engage with the local community. Tinley looks forward to taking advantage of COVE programming.

“What I look forward to is getting to meet new people while doing service together, and also to meet residents of Hamilton. … I know [the COVE does] a lot of stuff with the local community and kids and I feel like this is a way to reconnect the school to the local community, [a connection] which was totally broken for the last year and a half,” Tinley said.

Junior Stephanie Skura is an intern with the COVE and was an active volunteer long before her arrival at Colgate. Skura knew that she wanted to continue serving her community going into college and that this is something she looked for when applying to schools. The COVE caught her attention and was one of the first things she participated in on campus.

“During [my first year] during the … involvement fair at the beginning of the year, I was going around to all the tables, and I ended up signing up for a bunch of different random COVE clubs anywhere from tutoring to just chilling with kids, helping the community. And then last year, I was still involved in a few things. It was definitely harder with [COVID-19] and everything. But I was part of SAT prep, which we were able to do online, and Ophelia’s Girls, which we were also able to do online.”

Ophelia’s Girls involves Colgate students meeting with girls in Madison Central School and providing mentoring and support with the goal of female empowerment. Sophomore Gretchen Mueller has been a member of the group since last year and is very happy to finally be able to interact with the students in person.

“Last year it was a bit more difficult to connect with the girls, but being in person this year has been very different. We get to have so many more interpersonal interactions with them when we can physically be there with them, and it’s been a very nice change,” Mueller said.

As campus continues to resume normal activities and students have more and more opportunities to give back to the greater Madison County community, the COVE is thriving and preparing for another successful 20 years.