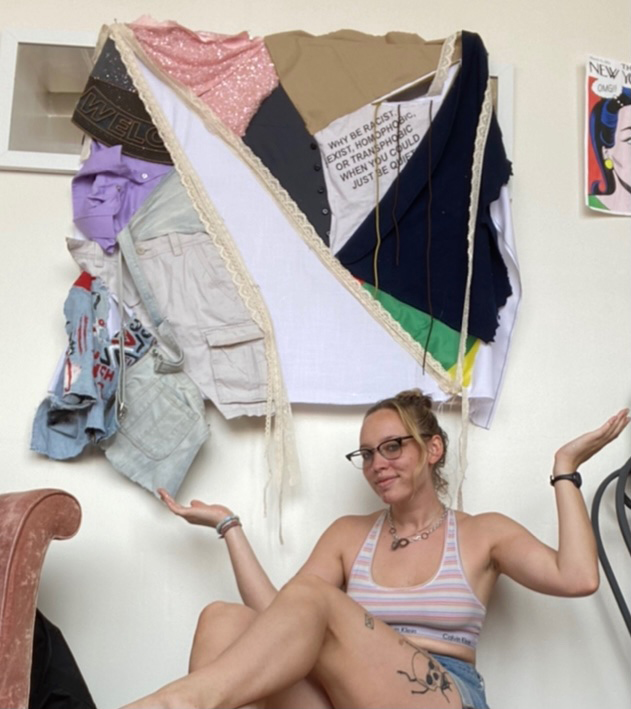 Artist, activist and Colgate senior Sally McGee creates intricate artistic collections that creatively mirror their academic interest in identity politics — those which concern sexuality, gender and community. Though they contend that their art career began at Colgate, their creative aptitude extends back to childhood. As the eldest of three siblings, they have always enjoyed entertaining those they care about most deeply with figments of their lucid imagination.

“My siblings really inspire me,” McGee said. “To entertain them, I was always telling stories. We were very creative kids — we made up a lot of fictional places.”

When McGee began to create tangible art, it was primarily a practice in self-care. She realized though that the medium of paint could convert her imagination to a palpable image. To foster inner-peace, she could reach for a paint brush and speak her mind in images.

McGee’s subsequent interest in portraying voice in her multimedia artwork has taken shape largely during her time at Colgate. After entering the University with an interest in peace and conflict studies, she later added the creative fields of film and media studies and studio art to her academic record. She grew interested in vocal representation beyond her individual psyche as she began to consider the impact of visual representation in her courses.

“I’d like to use visual representation to better things,” McGee said. “I’ve taken a step back from making art that speaks to my lived experience, and tried to find a place of belonging as a queer artist, and an artist in general.”

In 2021, McGee compiled a postcard series thematic of gender identity, with “Greetings!” from locations such as a bathroom, where strict gender separations silence those who identify as a gender distinct from their sex. The series features a large-sized retro font and black and white images, reflective of McGee’s appreciation for 1950s art. Cartoons characteristic of the time fill their temporary dwelling in Brooklyn Heights, where they’re studying abroad with the Colgate film and media program.

Last summer, McGee’s artistic vision landed her a spot in the Solomon R. Guggenheim Art Museum’s “Summer College Workshop” in New York City. There, a small group of students are selected yearly to facilitate progressive discussion and curate projects of their choosing. Over the course of ten weeks, McGee and her peers from around the country met to discuss bias in historic archives and formulate a project that pertained to their dialogue.

“We would meditate on archives and record-keeping systems and discuss how we tend to blindly accept the way that they are,” said McGee. “Institutions that hold seemingly ‘truthful’ sources, those that are actually subjective, have ultimately shaped the way we understand ourselves.”

The project, titled “UNHEMMED,” seeks to represent a history of LGBTQIA+ fashion and tradition. In each of the six pieces that make up their collection, pieces of clothing are strewn to photographs curated with careful purpose. In each image, McGee asked that their subject wear what makes them feel most comfortable within their identity, and to select a location with special meaning to them. The result is a collage of lived-in cloth from local Brooklyn thrift stores, and lived experiences on film. To McGee, the collection is a means of asserting the LGBTQIA+ narrative back into the institutions that have historically omitted it.

“As a queer kid, it was frustrating trying to come to terms with myself, and not having anywhere to look for that information.” she said. “Knowing that I wasn’t quite like everyone else, but not knowing why— I wanted to understand.”

McGee is a storyteller. As their art travels from her mind to her collections, they shape materials as simple as pigment and cloth into meticulous pictorial messages. Whether she’s advocating for the historically silenced or meditating on the future, it is their vision that guides their artistic principle.