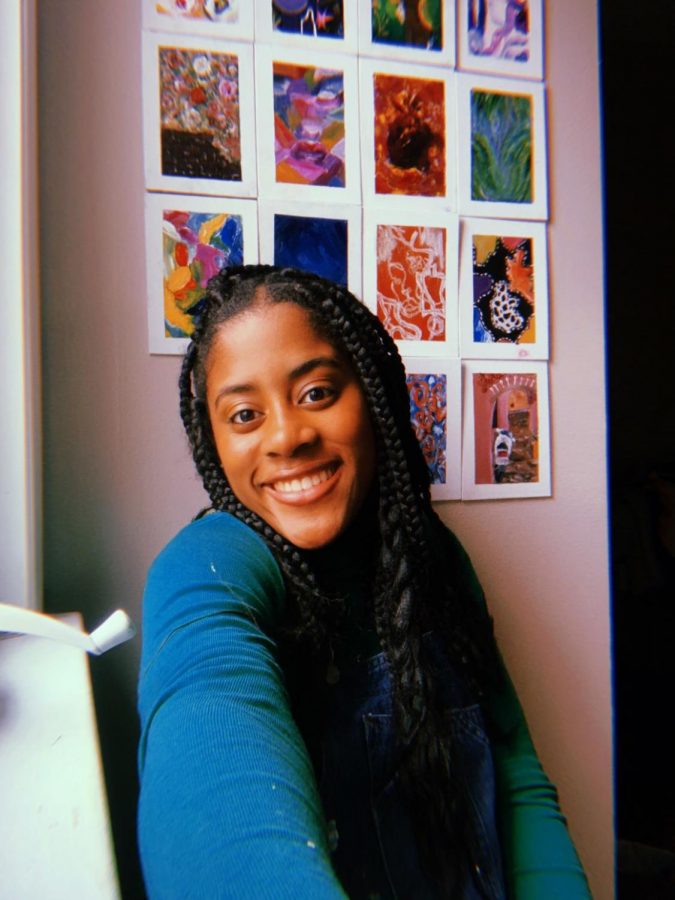 Adanya Jeudy is Not an Artist

Junior Adanya Jeudy is not an artist – at least, not by her own standard. While the 40-plus paintings displayed on her Instagram account may tell a different story, Jeudy tends to shy away from the label.

“I’m not, like, an artist artist,” Jeudy said. “I’ve just always liked being creative. It’s something that I’m relatively good at that brings me peace. But I don’t think of myself as an artist – I think of myself as someone who likes to paint, who some people might call an artist.”

Jeudy, a double concentrator in peace and conflict studies and educational studies, was one of many young adults that tapped into her creative side during the initial COVID-19 pandemic lockdown in 2020. That summer, in her backyard in Long Island, N.Y., Jeudy taught herself to paint. While the world whirled around outside of her, she processed her own internal frustrations through surreal, surprising work that often requires a second look to fully appreciate.

“Painting is something that helps me focus, and it stops [all the thoughts running in] my head,” Jeudy said. “I’m a big overthinker, so the things constantly worrying me slow down, and I get to focus on something that’s really pretty and colorful and fun.”

While her technical training does not go far beyond extensive practice and the occasional YouTube tutorial, Jeudy is no pandemic painter who intends to throw away her brush beyond the lockdown frustrations. Make no mistake: she cares about her art, and it is evident in the beauty of her work.

Her most recent piece, an acrylic titled “eden,” features a bouquet of flowers crowding around the center of the canvas, while a manicured hand reaches into them, a dead-eyed snake coiled around its fingers. The painting’s style is precise and dreamlike, its composition engaging enough to be studied at length. Sure, it’s pretty, but it’s also intriguing beyond the initial glance.

For a while, Jeudy’s art was personal, an outlet mainly for herself to appreciate. Then, when a friend noticed her interest and requested a piece, she began taking commissions.

“It started with a friend who, after she realized I was talking a lot about painting, hit me up and asked if I could do something for her room, and I was like ‘That’d be so cool!’” Jeudy said.

The piece, inspired by Harry Styles’ “Fine Line” album cover, was her first commission, but certainly not her last. Now, a decent bulk of her work is made up of commissions, and she finds creative fulfillment in seeing a collective vision come together on the canvas.

“It’s definitely nerve-wracking to give people your art like that,” Jeudy said. “There’s a different added pressure with commission work, but there’s some ease in that the people who are commissioning me like what I do. I don’t think I necessarily change too much between my commissioned work and the work I do for myself.”

Despite her undeniable talent, Jeudy does not see herself making a career out of art.

“It’d be really cool if a life path opened up for me where I could do something creative, like if I could be some sort of artsy lawyer, but I’ve never been actually trained, and I don’t have an art degree I’m working towards,” Jeudy said.

When she is not actively making art, Jeudy still finds ways to use the creative process to her advantage. The mental pathways that painting requires remain intact even in the lulls between bolts of inspiration, and show themselves in class discussions or projects, in essay writing and even in conversation.

“I think that the loops my brain goes through aren’t loops that people’s brains usually see things from,” Jeudy said. “And I like that about myself.”