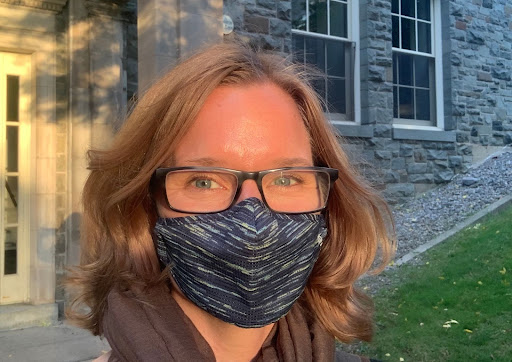 Printed with permission of Jenna Reinbold

Whether you practice a religion or not, there is an opportunity to learn about the decades-long conversations regarding religion and law. The difficulty in distinguishing what is regarded as religion, the language of law meant to deal with religion and who makes the decisions is extremely complex. Associate Professor of Religion Jenna Reinbold has dedicated her work to understanding this relationship between religion and politics.

Reinbold was born in Boise, Idaho and spent most of her life in Los Angeles and San Diego, Calif. She received her BA from Portland State University and earned a masters and a doctorate in religious studies with an emphasis in global studies from the University of California, Santa Barbara. During the end of her PhD program, Reinbold moved to New York for a one-year visiting position at Vassar College.

Now, Reinbold is in her 14th year as a Colgate professor. The topic Reinbold was originally hired to teach at Colgate was “Religion and Civic Life,” which focuses on the relationship between religion and modern legal and political settings. Many of the classes led by Reinbold pertain to this interaction between politics and religions, such as “Church, State and Law in America,” “Sex, Law and the American Culture Wars,” “Our Secular Age” and “Native American Religious Freedom.”

“I’m not sure that I can pick a favorite course since I truly love everything I teach, and the kinds of things I teach about are so dynamic that I pretty much constantly have new material to work with,” Reinbold admitted.

Her focus on religion and civil life along with the conflict with which they are fraught offers a great opportunity for Reinbold to encourage students to face ideas and perspectives that they disagree with.

“This work of pushing people to really engage with difference is a central commitment for many scholars of religion, and it’s also a key element of Colgate’s vision of a liberal arts education, so Colgate has always been a great fit for me as a teacher.”

Reinbold has an impressive amount of published works concerning religion and human rights. Much of her time is spent in the writing process researching church-state controversies in the United States. The article that Reinbold is currently working on is about the COVID-19 pandemic and the questions it has raised regarding free exercise of religion in the U.S., such as declaring grocery stores essential and churches non-essential, and the response of the U.S. Supreme Court to these denominations.

“I love writing about law because people often think of the legal realm as a place where messy questions get resolved, but this idea of law as a mechanism for cleaning up or solving things really overlooks a lot of the interesting messiness of law itself — how the languages and categories of law open up, and close off, possibilities for what kinds of claims and questions even get engaged in the first place,” explained Reinbold.

Reinbold is co-teaching “Sex, Law and the American Culture Wars,” alongside Professor of Political Science Tim Byrnes this semester. The class is discussing the 2015 U.S. Supreme Court decision to legalize same-sex marriage and the efforts of the court to protect the religious freedom of those who have religious objections to same-sex marriage.

“Now, however you feel about opponents of same-sex marriage, there’s no denying the fact that the U.S. Constitution contains a provision that protects the free exercise of religion … so this question of what happens to religious opponents is something that had to be addressed in this case,” explained Reinbold.

The courts emphasized that people practicing religion were free to believe whatever they want, passing this as protection of religious freedom.

“The problem with this approach is that religion is often about much more than just believing stuff; religion often requires people to actually do stuff, so telling people that they’re free to believe what their religion tells them just doesn’t get to the heart of what free exercise actually entails. In a case like this, knowing a bit about religion allows us to catch a glimpse of how incomplete and arbitrary the language of law is,” said Reinbold.

She added that these conversations contribute to the debate over religion and COVID-19 regulations.

During the pandemic, Reinbold found enjoyment in baking, particularly sweet dishes. In her free time, she loves hiking and being outdoors with her 8 and 10 year old children. Her family also enjoys traveling and are visiting Scotland next month while she leads the Spring 2022 Colgate study group there.