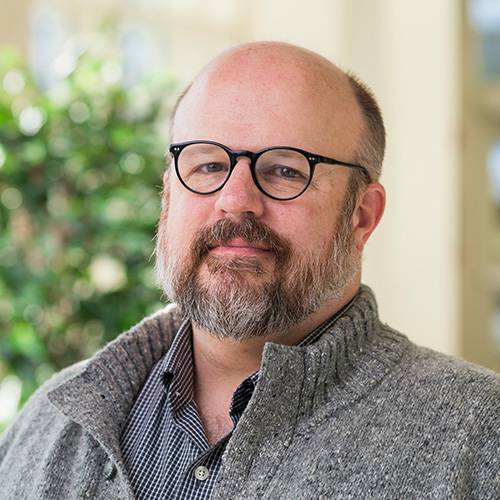 Within the sacred halls of the Colgate Memorial Chapel lies a breadth of history of the confluences of faiths of all backgrounds. The chapel is a universal space for student groups at Colgate. Here, you can find Deacon Mark Shiner, the associate university chaplain and Catholic campus minister, attending mass or even mentoring aspiring drummers in the chapel music rooms.

Shiner graduated from seminary in 1995, where he studied Catholicism. In 1999, his wife, Rebecca Shiner, accepted her position as a professor in Colgate’s psychology department. During these four years, he had difficulty finding ministerial positions and decided to stay home to care for his children during the day and be a professional freelance musician at night as a percussionist, playing genres ranging from musical theater to blues. Shiner was able to find his niche in the religious communities at Colgate, first as a lay person in 2003. He worked as the Catholic chaplain and associate university chaplain for the first two years and then as the university chaplain from 2005 until 2017. He became ordained as a priest in 2012 and has facilitated many alumni weddings. Now, he occupies the roles of chaplain and minister.

The Colgate Newman community seeks to assist in the integration of faith and learning through fostering a strong commitment to interfaith dialogue, service and respect. As a member of the Newman board, Shiner works closely with the student body and hosts a variety of bonding opportunities such as the notable Newman lunches featuring guest speakers and apple-picking on weekends. Shiner has never wavered from being a reliable source in his community, especially during the COVID-19 pandemic when faith was wavering. During the pandemic, Shiner observed the need for a change in programming, and began teaching classes focused on wellness and spirituality for PE credit. He also started making time for one-on-one counseling within Colgate and pastoral care in the surrounding community.

“COVID-19 was brutal for religious communities. Such a big part of what it means to be part of a religious community is to be together,” he stated. “It’s to be in each other’s presence. We were surprisingly successful in attendance at mass last year. … We tried to keep it normal. This year, students came back seeming emotionally groggy, in terms of their ability to jump in and do stuff, but they’re slowly getting their feet under them.”

Most recently, the Newman community has been running a new dinner program on Wednesday nights, focused on building a community among students over food and dialogue. Shiner envisions a bright future for the chapel as a space for Catholic and other religious communities to become one, despite everything feeling as though it’s beginning again. Given recent social movements, which have sparked critical conversations on harm and oppression in the Catholic church and clergy nationally and globally, Shiner harnesses a specific focus on inclusivity of identities and opinions in the work he does, and is open to suggestions from student voices.

“[Students have a] desire to be together, to be known, to have a place,” he emphasizes. “When I say ‘students,’ I don’t just mean Catholics because I think these are universal human desires. It’s important to figure out how you encourage people in creating the basic conditions for the spirit to manifest itself, where an openness to deep love and compassion for each other becomes a possibility. It’s been rough for Catholicism in history right now and I empathize with people’s frustrations with the institution. That’s a no-brainer. At this point, you can’t look at it and say ‘Yeah, we’re crushing it.’ How do we establish credibility in those contexts? That’s one of the most vital things right now: creating ways of caring for each other that aren’t set up to be exploitative.”

Shiner emphasizes the importance of caution and encouragement of comprehending faith and belief systems, especially in the times we are living in now. He encourages students to embark on paths of inquisitiveness and find solace in supportive communities.

“I think [there is] a deep longing to know that you’re loved, that you’re a part of a plan, that your suffering has meaning, that the longings you have for relationships are actually built on something. That those experiences of transcendence mean something,” he shared. “If you’re in a community, you’re going to wish that your community was better, but if you’re not in a community, you’re going to wish that you had one. … It takes courage, but also remember that it should end in greater love for your neighbors for justice, for the people around you, and that can become a real motivator for you to want to change the unjust. … Ultimately we’re moving in a direction toward a more humane future.”

Shiner encourages students to keep searching for communities and questioning. He hopes students attend Newman lunches, Catholics and non-Catholics alike, not as a means of indoctrination but rather of challenging oneself to have conversations about different ideas, a tenet that lies at the heart of the liberal arts experience. As for future plans, Deacon Shiner will be leading an interfaith trip with colleague Rabbi Barry Baron to Italy, focusing on Catholic and Jewish faiths in the region. Open to students of all faiths, it seeks to explore historical legacies of religion through studying literature, architecture and individuals’ stories.