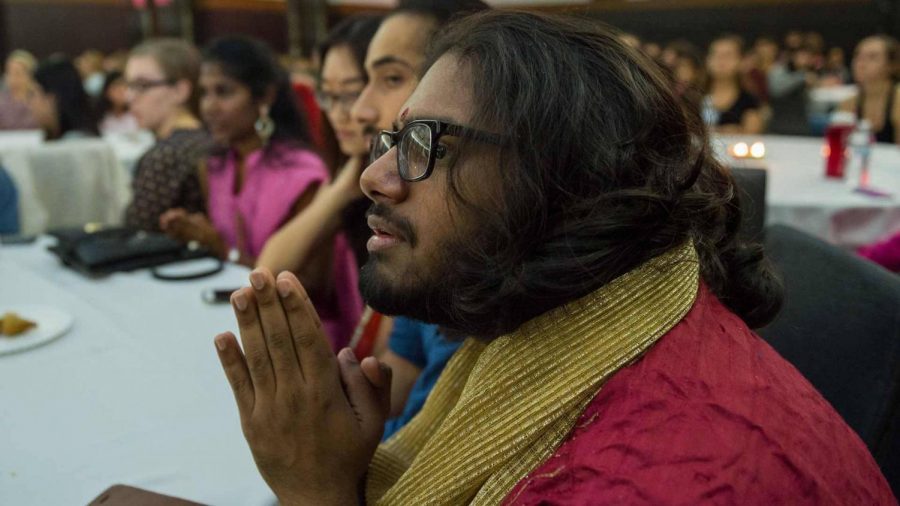 The Hindu Students Association (HSA) put on one of their biggest events of the semester on Nov. 13, when they invited the Colgate community to gather in celebration of Diwali, the festival of lights. The event began with a short presentation by HSA President Kartik Devpura, who explained that Diwali is a 5-day holiday celebrated by Hindus, Jains and Sikhs all over the world. Devpura remarked that the holiday marks the legend of the homecoming of Prince Rama of Ayodhya after he defeats the demon Ravana. According to the story, the people of Ayodhya lit up the city with lights to celebrate Rama’s victory. Today, Diwali is still celebrated with light, both by lighting diyas, which are small lamps made out of clay, and igniting fireworks.

The celebration at Colgate featured a large-scale fireworks display, a puja (a ritual worship led by a Hindu priest), singing and guitar student performances and trays of food from the Royal Indian Grill in Syracuse. All of this would not have been possible on Saturday without the work of the HSA’s board, which is composed of six students.

Junior Jyotirmay Chauhan, an international student from India, serves on the board as the cultural liaison and handled many of the event’s logistics. Chauhan remarked that the HSA holds a special place in his heart because of the overlap between communities, evidenced by the Diwali event.

“Generally there’s a high turnout from members of the international community and members of other cultural and religious organizations on campus. There are a number of domestic students, as well. While these events can be more centric towards people who are intrinsically associated with this culture, there’s a widespread appeal for Diwali … the way [the HSA] shape[s] Diwali is that it’s appealing to everyone at Colgate, not just Indians or those practicing Hinduism,” Chauhan said.

Another theme emerges from Chauhan’s sentiment: the inclusivity and feeling of community that the HSA provides. Sophomore Aranya Pal, who serves as the treasurer for the group, also speaks highly of his experiences in the club.

“Our gatherings are more of a ‘fun’ [rather] than ‘religious’ meeting, but at the same time, we have the religious team available to everyone, so it includes everybody. Even if you’re not strictly a Hindu, you can still be part of it to get to know more about Hinduism, but at the same time it’s kind of relaxed so you don’t feel like you have to be already part of Hinduism to be part of the club,” Pal said.

Senior Usman Ahmad was one of the student performers, along with junior Saniya Dalvi, at the Diwali event, playing the guitar and singing Bollywood songs including “Dil Diyan Gallan” and “Ishq Sufiyana” in Hindi.

“The response I received [after performing] was extremely heartwarming. There were many people who reached out to me after my performance expressing how they loved it,” Ahmad said.

Though Ahmad practices Islam, he still attended and performed at Diwali, which is not an Islamic religious event.

“Islam puts a great deal of emphasis on the importance of community building. This involves supporting members of the community around you in their highs and lows, regardless of their religious affiliations. It was this spirit of sharing happiness that motivated me to be a part of this event as a performer,” Ahmad said.

Junior Nandini Krishna, a non-board member of the HSA, attended the Diwali celebration with both Hindu and non-Hindu friends.

“I loved that we had a priest come in and perform the rituals, because that’s how I would typically celebrate the festival at home with my family, so it definitely made me feel connected to my religious and spiritual roots,” Krishna said. “I love that we have [the] HSA on campus, I think it helps the Hindu students feel connected to home and provides non-Hindu students with an avenue to learn about our culture and customs.”

When the student association isn’t busy planning celebrations of Diwali, Holi or various brown bag events, they meet most Sundays in the Memorial Chapel basement, where they hear presentations on different aspects of Hindu culture and enjoy a meal together from either the Royal Indian Grill or New York Pizzeria.

Roughly two or three dozen students come to meetings regularly. Sometimes, the HSA meetings happen on the same night as the University church meetings, so they join each other for dinner in the chapel basement. In the interest of inclusivity and collaboration, the HSA is planning to have a joint meeting with the Muslim Student Association, another religious group on campus, sometime by the end of the semester.

For both Pal and Chauhan, the HSA has been an integral part of their Colgate careers since their respective arrivals on campus. Pal’s first semester at Colgate was in the spring of last year, and the HSA provided him with an immediate community when other events were not able to happen due to the COVID-19 pandemic.

“I met many of my current friends through the [HSA weekly] meetings [which we attended] together. I got to meet a lot of friendly faces on campus. It made my transition easier,” Pal said.

Chauhan had a similar experience when he joined the HSA as a first-year during the Fall 2019 semester.

“Joining the club was a great way to meet domestic students and people with similar interests [as me],” Chauhan said.